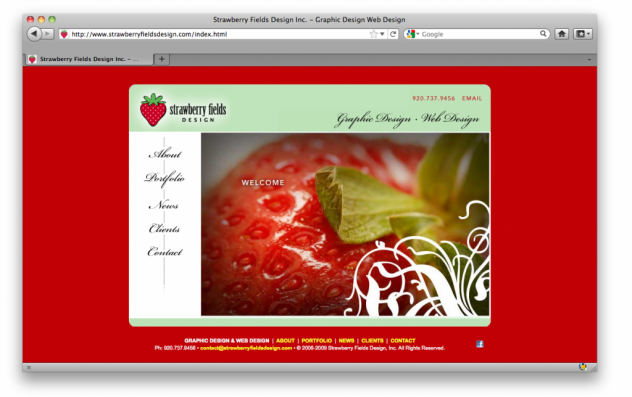 StrawberryFieldsDesign.com was also nominated for the Best of Show Interactive Award.

“I was very excited to find out I had won a Gold ADDY®, especially for my own website,” Sorbo said. “I almost didn’t believe it when I was nominated for Best of Show Interactive. To be nominated along with an agency and a company with large in-house marketing department was an extreme honor.”

When she incorporated her business last year, Sorbo said at first she was focused on her clients rather than self-promotion, and settled for a template-style website that she realized was not showing her best assets as a designer.

Strawberry Fields Design prides itself on making a good first impression for its clients through eye-catching design that makes a statement. Their client list includes a wide variety of businesses – from realty companies and clinics to retail outlets and entertainment venues.

“I had a great time working on my website design project. It was fun to do a project that was completely me,” she said, “but I have to admit that I was definitely my most demanding and particular client.”

The name of Sorbo’s business reflects her longtime passion for The Beatles.

“I am a huge Beatles fan and have been collecting Beatles memorabilia since I was a teenager, much of which is displayed in my studio,” she said. “Strawberry Fields Design was named after the song ‘Strawberry Fields Forever.’ From a branding aspect, I thought I could do a lot with the strawberry theme.”

The strawberry theme is put to particularly good use on Sorbo’s award-winning website.

“My site shows my style – I like to keep things simple and clean and focused on great design to sell a product or service. I often see websites, brochures, and other print materials that are so busy it’s tough to tell what the business is trying to say or sell.”

The American Advertising Federation, a not-for-profit industry association, conducts the ADDY® Awards through its 200 member advertising clubs and 15 districts. It is the only creative awards program held by the industry for the industry.

Sorbo sees her award as an affirmation of her design and business skills.

“As a freelancer it can be difficult to get professional feedback on your work,” she said. “I try to ask seasoned designers for critiques of my work to help keep me at the top of my game. So this award is kind of a seal of approval for me.”