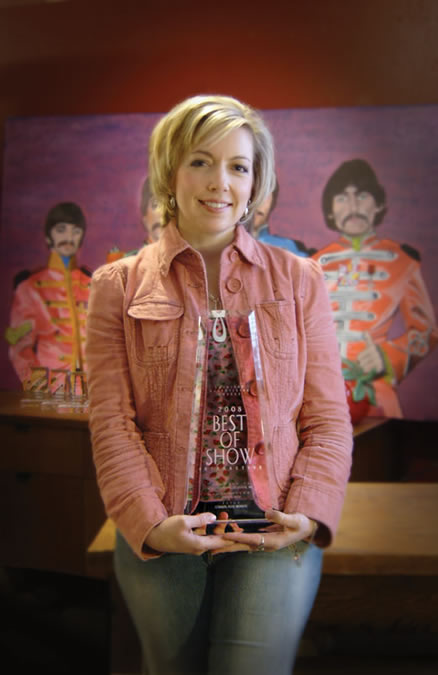 The American Advertising Federation, a not-for-profit industry association, conducts the ADDY® Awards through its 200 member advertising clubs and 15 districts. It is the world’s largest advertising competition, and the only creative awards program held by the industry for the industry.

Strawberry Fields Design was honored with a Gold ADDY® in the Interactive Media division, and was also awarded Best of Show Interactive—one of only three Best of Show awards (print, broadcast, interactive) presented—for a website designed and developed for Cowgirl Rose, a custom jewelry designer in Tennessee. The website went on to win a Silver ADDY® Award at the District level. 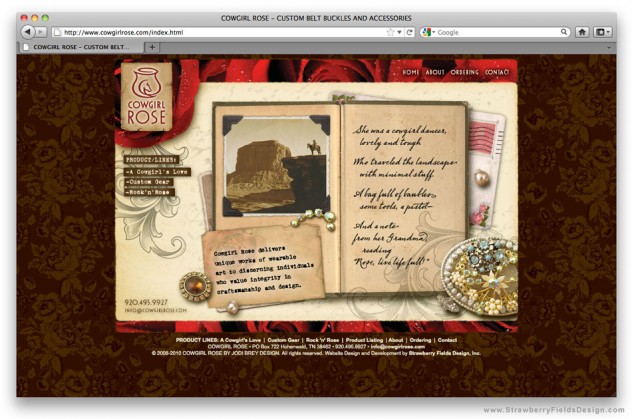 “I was completely shocked,” said Addie Sorbo, Strawberry Fields Design founder and graphic and web designer. “I’ve dreamed of winning Best of Show, and when they called out my name, it took me a moment to realize what had just happened. I am so very honored.”

“Cowgirl Rose founder, Jodi Brey and I were classmates at UW-Green Bay. Brey is a fun, funky and environmentally friendly artist, and we collaborated to design an entire campaign to reflect that brilliant personality,” said Sorbo. “We tried to personify who Cowgirl Rose was, and tell her story throughout the website. I really love how the site shows the product as well as the designer’s style. It speaks to anyone who would wear her designs.”

“This one really paid off, and both Brey and I were thrilled with the end product. I’m so pleased the ADDY® judges felt the same way,” Sorbo said. 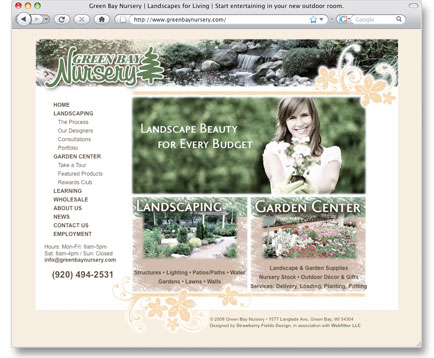 This year, Strawberry Fields Design also won a Silver ADDY® in the Interactive Media division for the Green Bay Nursery website. The ROM Group, which worked on the nursery’s corporate strategy, tapped Sorbo to design the website. Webfitter then developed the site.

“Green Bay Nursery is a solid company that needed to take a new direction with their marketing efforts. I really enjoyed working with a team of local professionals to strategize and develop their website redesign,” said Sorbo. “We’ve gotten a lot of response from it.”

Strawberry Fields Design may be only three years old, but it’s no stranger to winning such prestigious awards. In 2007, Sorbo won a Gold ADDY® for design of her own website strawberryfieldsdesign.com, and that work was also nominated for Best of Show Interactive.

She also took home ADDY® Awards in 2000 and 2001 while working as a graphic designer at the Weidner Center in Green Bay.

“These awards are truly the icing on the cake, so to speak, of my professional career,” said Sorbo. “They not only honor hard work and creativity, but they help legitimize my work to a broader audience—especially those who might find my firm only through online searches.”

The local ADDY® competition is sponsored by the AAF Fox River Ad Club. Sorbo accepted her firm’s awards at a ceremony March 6 at the KI Convention Center in downtown Green Bay.

About The AAF ADDY® Awards

The American Advertising Federation’s (AAF) ADDY® Awards honor excellence in advertising and cultivate the highest creative standards in the industry. With 55,000 entries and three separate judgings, the ADDY Awards are the world’s largest advertising competition and arguably the toughest. Each fall the competition begins at the local level with the over 200 AAF member clubs nationwide. The local winners advance to 14 district competitions, and those winners advance to the national finals. Less than one percent of entries receive a national ADDY® Award.